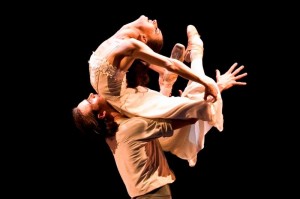 Dance by and for people with no interest in dance

An apocryphal story tells of an awful theatrical adaptation of the story of Anne Frank. When the Nazis arrive to search the house where the family are in hiding, an enraged theatre-goer shouts, “She’s in the attic!” Well, I didn’t quite point Anna Karenina to the train station, but the thought crossed my mind.

Boris Eifman has always divided the critics. Western audiences tend to respond the way they do to car crashes: they are appalled, but find it hard to look away. Russians, meanwhile, virtually stand on their seats and scream for more. Eifman, who since 1977 has run his own company in the teeth of Soviet hostility, is now garlanded with praise at home, having new studios and a school created for his own company.

But his ballet vision is, to Western eyes, still stuck firmly in those decaying decades of the fin-de-Soviet empire, when the Lycra ballet was king, and clutch ‘n’ grope the method of choice. If Ken Russell could choreograph, Anna Karenina is the ballet he would have made. Maurice Béjart (or, as the great critic Arlene Croce spelt it, “Beige Art”) did choreograph, and this was precisely the type of thing he made.

Eifman doesn’t waste much time or trouble on design or music. The set, by Z Margolin, is a gilt-turned balcony which looks like a Faubourg St-Honoré chocolate shop transported to a Midlands market-town in the 1950s. The music is not only taped, but is bits and pieces of Tchaikovsky, wrenched asunder at will to suit the choreography.

The story is reduced to its bare minimum, simply Anna (Nina Zmievets) torn between an agressive husband (Oleg Markov) and a loved son, and Vronsky (Oleg Gabyshev), all swoony rapture. There is no attempt to show the society the trio live in, to explore why Anna is unable to settle. Karenin has no tragic grandeur, he is not the caring but restrained man, but simply a bully, and a rapist to boot.

But that kind of coarsened value, the black/white melodrama, is Eifman’s home. We know, for example, when Anna is unhappy with her husband, because she shifts from classical steps to pseudo-Martha-Graham contractions; Karenin’s dilemma is displayed by wrapping his arms around his body, while his determination exhibits itself in pacing with hands behind his back à la Prince Philip.

It is hard to assess his dancers by any ordinary means. They perform Eifman’s clotted, dense steps with ease, and sail through lifts that are gymnastic rather than balletic (my favourite is when Anna perches on Karenin’s head, and, so burdened, he marches solemnly across the stage). But whether they have any musicality, any ability to shape phrases, create dance moments – well, they’re not asked to. Instead they  telegraph emotion by clutching their brows, or other portions of their anatomy.

Occasionally there is a moment when Eifman sets up a nice theatrical situation: Anna and Vronsky are both alone in their beds, thinking of each other, and the light shifts back and forth between them on opposite sides of the stage. But even then, the choreography they perform is so same-y, so pedestrian, that nothing comes of the scene.

Given Eifman has been doing this sort of thing for nearly four decades, it seems odd to call his work amateurish, but that is, ultimately, what it is: dance by and for people with no interest in dance.