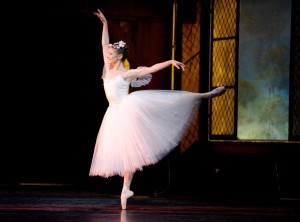 Ballo della Regina is a strange piece, for many reasons. A piece of minor Balanchine, it was created late in life for a dancer he clearly admired but who was not core to his vision. Strangest of all, he used music by Verdi, a composer whose music he had only choreographed to in his very early days as a journeyman opera-house ballet-master, when he did not get to choose.

So what does the piece tell us? Very little, really. Staged by Merrill Ashley, its original lead, it is efficient, neat, well-rehearsed. And I can see no real purpose to it. The curtain rises on a heart-liftingly familiar Balanchine opening, turquoise scrim, a corps of 12 women strung out like beads across the stage. They are joined by four soloists (Yuhui Choe and Beatriz Stix-Brunell dancing particularly beautifully), and then by the lead couple, Marianela Nuñez and Nehemiah Kish.

Nuñez performs technical feats of bravura skill in her fiendishly difficult steps (there seems to be barely a second when she is off point, and she is usually required to jump from and to point as well). Kish is not particularly well suited as her partner, or to this role: he is far too tall, and his extremely long torso makes him look awkward even when his steps are neat and clean; in his jumps his arms wave distractingly, and he seems uncentred even when he is not.

But it is the piece itself where the trouble lies. It has no real impetus, no forward motion driven by the music. A ballet number from the opera Don Carlos, it stops and starts in for a drama that no longer takes place; it rises to a climax, hails a procession that does not materialise; the brass bombast must sound wonderful accompanied by opera staging, but when wisps of dancers skim the stage, it seems foolishly overblown. All credit, therefore, to everyone on stage for making the action seem more purposeful than it is.

With La Sylphide there can be no such questions of purpose. This is a revival of Johan Kobborg’s staging of August Bournonville’s early 19th-century classic of the Romantic repertoire. Alina Cojocaru could not be more perfectly cast than the sylph that slides into a prosaic Scottish farmhouse and lures the soon-to-be-married James (Steven McRae) away from his fiancée Effie (Emma Maguire) and to the forest glen where, of course, he meets an unhappy end.

Cojocaru is a dancer of richness. Here her acting skills make the mysterious sylph live. Does she want James because she is in love with him? Or because she wants to torment him? To spite Effie? Is she driven to it by something greater than herself? With Cojocaru it is all of these things, and they change, from minute to minute. Now she is alluring, now she is a puppy begging her new-found friend to come and play, now she is a tantalising scent on the breeze, barely visible at all. In her dancing, the accents, speeding up, slowing down, never come where one expects. Yet they are not perversely chosen, but always driven by the music first, and then the drama.

James’ is a less sympathetic role: he has, after all, dumped his girl to chase out into the woods. McRae makes his longing for something more than he has, something he can’t define, understandable, and even (almost) commendable. His dancing, too, is fine: wonderful clean Bournonville jumps, crisp, clear, clean footwork, good height. Valentino Zucchetti, who plays Gurn, the farmer who will step in and marry the spurned Effie, is his equal here: a very very impressive performance indeed from this young soloist, and his jumps are formidable.

Kobborg has ensured that the details are meticulously observed. Kristen McNally’s Madge, the crone – is she a witch? We never really know – who wants revenge on James and foretells his doom is particularly enjoyable, especially the genteel refinement she uses in wiping the corner of her mouth after sinking a couple of glasses of schnapps.

About inspectorbucket
Sue Bradbury: Joanna, George and Henry: A Pre-Raphaelite Tale of Art, Love and Friendship   Whose review is it anyway?