Can We Talk About This? DV8 Physical Theatre, National Theatre 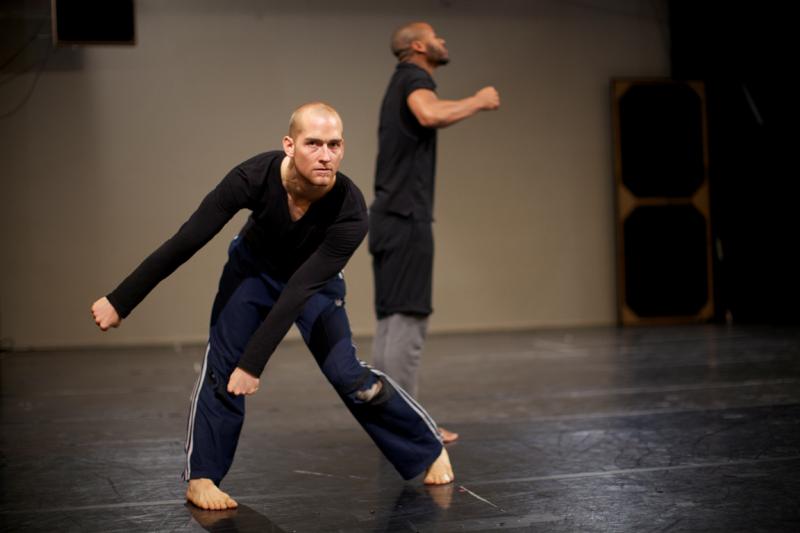 “Do you feel morally superior to the Taliban? Well, do you?” And we’re off, with another of director/choreographer Lloyd Newson’s interrogations of a taboo subject. DV8 Physical Theatre is 25 years old this season, yet if anything, it, and Newson, have become more challenging, not less as the years go by. Gone are the lyrically silent pieces of the 1980s, and instead movement is almost always now allied with talking; indeed, talking has become Newson’s main mode of communication, as his urgent need to vanquish our beliefs and replace them with his becomes ever stronger.

Thus the cost of tolerance is intolerance: if we accept that freedom of speech permits certain groups to preach hatred of gays, of Jews, of “other”, we slide invisibly into accepting that, at the same time, we may not ourselves preach hatred of fundamentalism.

Newson has a point, and his 11-strong troupe present scene after scene describing the fall-out of the Salman Rushdie fatwa, of the Geert Wilders debacle, of forced marriage, of honour killings, of the Danish Muhammad cartoons and more. Some of the visual and physical effects are extraordinarily powerful – Christina May, as Ayaan Hirsi Ali, describes her situation as the scriptwriter of the film Submission, for which Dutch filmmaker Theo van Gogh was murdered, all the while scoring her body through with a great black line – defacing herself. Or the company stand, one by one dropping photographs of all of those murdered in the name of “respect” for Islam. Or the remarkable Joy Constantine, as MP Ann Cryer, is manipulated magically across the stage as she gently tells of her campaign to bring the crimes of forced marriages and honour killings to national attention.

The collage effect has power, until suddenly it doesn’t. Because there is no narrative arc, just a series of scenes, the evening, only 80 minutes long, feels longer. Theatre verité, or perhaps it is better called drama-verbatim, has great power. The Tricycle’s transcript plays – the Stephen Lawrence case, the summer riots – frequently have more power than the carefully constructed artifice of a scripted production might. At the National itself, Alecky Blythe’s London Road took taped interviews and wove them into an incantatory tour de force in its depiction of the murder of five prostitutes in Ipswich.

But these are single stories: the rise and fall is built in. Newson takes a much wider, and more abstract, subject, which presents equally large problems when it comes to shaping the evening. Mostly he navigates these successfully, and through personalisation, through his stylised, repetitive, tic-like movements, his twisting falls, torqued bodies and unison beats and skips, he brings an extra dimension to a question that demands serious consideration.

Yet his judgement is not infallible. Indeed the opening, when we are lectured on Taliban atrocities by a dancer writhing and twisting like a gaffed salmon, and then on Bradford’s 1985 race situation by three men tick-tocking their heads like metronomes, did make me wonder if I’d stepped off the space-time continuum and reemerged in a Joe Orton revival.

But while I see the value of what Can We Talk About This? is doing, equally I question if there was a single person in the National who disagrees – who disagreed when they came in, as well as when they left. No minds were changed at the Lyttelton. We are all in the choir, in our nice, liberal leftie theatre seats. It is not we who needs convincing. Is it?

Watch DV8 in Can We Talk About This?: