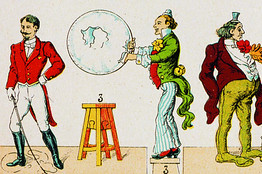 When John Major, who started his career in a bank, became British prime minister in 1990, newspaper articles recounted his father’s early days as a music-hall performer. Mr. Major, the wits quipped, was the only person who ever ran away from the circus to join a team of accountants.

Duncan Wall is the anti-Major: Born in Milwaukee, the son of accountants, he fell in love with the circus on a trip to Paris as a college student. This was not your usual red-hatted extravaganza but a particularly French form of “new” circus, with acrobats who quote Proust. The Midwestern boy had preferred Disneyland, but the theater-major adult was now hooked, and by dint of a Fulbright scholarship he returned to enroll in Paris’s École Nationale des Arts du Cirque. Since then he has continued his academic love affair by teaching circus history and criticism at Montreal’s École Nationale de Cirque, Canada’s main circus school.

In this chronicle of the circus past and present, Mr. Wall delightfully revisits lost celebrities of the 19th century: Mme Saqui, the French rope-dancer, in her white tulle skirt covered in blue-spangled stars; Isaac Van Amburgh, the American animal trainer who was reputedly the first man to put his head in a lion’s mouth; and William Wallett, an English clown who wowed Paris with Shakespeare burlesques. (“Is this a beefsteak I see before me?”) He visits the great circus venues of the past, including Paris’s Boulevard du Temple, which in the 19th century was the home of the Théâtre des Funambules, famous for acrobatic pantomime. (It seems an opportunity missed not to mention the film “Les Enfants du Paradis” (1945), in which Jean-Louis Barrault depicted Baptiste Debureau, the great mime of the early 19th century.) And he puts into context how the contemporary art-and-entertainment spectacle that is Canada’s Cirque du Soleil came to be the phenomenon it is.

The circus was invented in the 1760s by a British cavalry officer, Philip Astley, who started with trick riding, moved on to “hippodrama” (plays in which horses took center stage) and established many of the basics of circuses, including brass-band marching tunes, a broad center ring and even the “big top” itself. Only when P.T. Barnum retired from his American Museum in New York and went on the road, in the 1880s, did the circus take the form we know: that mixture of short acts, animals, skills such as juggling and tumbling, and, most important, the gigantification of everything.

A new technology, the railways, enabled circuses to travel the world, reaching ever more people. But technology also killed the “old” art. As the performers continually found new audiences, there was no reason for them to develop their acts: The audience was new each week, not the show. Ernest Hemingway wrote that the circus is a “happy dream” but, as Mr. Wall suggests, in a dream the dreamer reconnects with what he already knows. “You didn’t go to a circus, you went to the circus,” said one historian about Barnum-esque circuses: They were, in truth, all the same.

With ever newer technology—film, then television—the circus as grand spectacle was doomed, as fantasy worlds could be found more easily, and more cheaply, at the cinema or even at home. Cars, and urban sprawl, also devastated the old means of drumming up excitement and a sense of community—parades and the big top became meaningless in towns with no center.

In Europe, where smaller circuses worked locally, innovation remained a primary requirement for each company, to lure in repeat customers. It was in altering the predictable formula of touring circuses that the new-style French circus—the kind that beguiled Mr. Wall—came into its own. It features longer pieces than the episodic performances of the traditional three-ring venue, along with narrative sections and musical interludes.

The Cirque du Soleil is a return, in many ways, to P.T. Barnum’s gigantism, with its 4,000 staff, revenues nearing $1 billion a year and a dozen touring and permanent shows. To its detractors Cirque du Soleil is Wal-Mart, or Disney DIS +0.83% : the blandification of the circus. In France, by contrast, the circus is considered an art, deserving of subsidy—€9 million annually helps support more than 400 circus companies and more than 150 schools.

It is with these practitioners that Mr. Wall’s interest really lies, with jugglers such as Jay Gilligan, an American who mostly works in Europe, or Jérôme Thomas, a Frenchman who has revolutionized what juggling can be, merging circus skills with existential profundities as only the French can. These men are as far from corporate junkets, or Las Vegas hotels, as it is possible to imagine. They see themselves instead as the inheritors of the great 19th-century traditions, even as they develop productions that push the boundaries of performance history.

Their seriousness of purpose does make one wish, however, that Mr. Wall’s own engagement with the broader sweep of history was a little more robust. Sometimes it sounds as if he is simply repeating ancient press releases without engaging his critical faculties, as when he tells us that the belle-époque juggler Cinquevalli “purchased diamonds for journalists.” Other events are simplified until they become meaningless. A ballet master patronized by Marie Antoinette and the Empress Maria Theresa is really not a good representative of the flattening of the class system. After England’s “Glorious” Revolution, in 1688, the price of horses did not drop until “anyone” could afford one. Workers in Industrial Revolution cities did not live in “ghettoes.”

But when he sticks to his own subject, Mr. Wall allows readers to share his wonder at the circus world’s arcane jargon: a “board muffin” (assistant standing on the top perch to help the trapeze artist) uses a “noodle” (hooked staff) to catch the trapeze. Mr. Wall’s technical descriptions of what happens on a trapeze, or even of how a somersault is turned, make you look afresh at what had previously seemed obvious. And that may be the greatest trick of all.