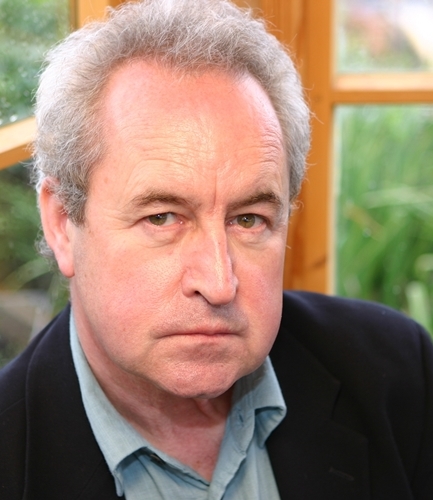 ‘A man is not much if he can’t depend on himself, and nothing if others can’t depend on him.” So says business tycoon Victor Delahaye at the start of Vengeance (Henry Holt, 304 pages, $26), the fifth of Benjamin Black’s mysteries set in 1950s Dublin. After embellishing this bit of life guidance with a story about his father taking him for ice cream and then abandoning him—”Self-reliance, you see”—Delahaye pulls out a gun and messily commits suicide.

This tartly playful opening is a tour de force, and one typical of Mr. Black, who enjoys confounding readers’ expectations. Mr. Black himself is the alter ego of the Booker-Prize-winning Irish novelist John Banville, whose novels under his own name are filled with cerebral teasers, such as quoting Nietzsche without attribution in The Book of Evidence (1989) or, in The Newton Letter (1982), naming a character Prunty (the Brontës’ original, Irish, name), leaving readers to scramble along in his wake.

As Benjamin Black he plays with us too, but more inclusively—more generously, perhaps. In these novels, references to detective fiction abound, from Sherlock Holmes, through the canon of the 20th-century Golden Age (John Dickson Carr, Ngaio Marsh, Josephine Tey, Agatha Christie), to American assembly-line Nancy Drew. “Benjamin Black” itself is almost a crossword-puzzle clue—Benjamin, meaning “offspring of the right hand” in Hebrew, plus Black, a broad allusion to the noir genre he pastiches so elegantly.

Mr. Black’s protagonist is a pathologist with a penchant for detection named Quirke, whose unknown first name brackets him with Robert B. Parker’s Spenser and Colin Dexter’s Morse. (In a hat-tip to the hero of the now obscure novels of R. Austin Freeman, another pathologist who briefly appears in Quirke’s first outing, Christine Falls (2006), is named Thorndyke.) Morse’s first name was eventually revealed to be Endeavour; Quirke’s surname is no less suggestive, while the common Irish name of his adopted brother—Malachy—is ominously abbreviated to Mal.

In Vengeance, Quirke and his partner, Inspector Hackett, nose around the case of Delahaye’s suicide. The only witness is Davy Clancy, the son of Delahaye’s aggrieved business partner. The police accept Davy’s account of the incident, but Quirke and Hackett are less persuaded, even before a second unexplained death makes the crosscurrents between the Protestant Delahayes and the Catholic Clancys worth examining.

Meanwhile, Mona, Delahaye’s sulky and substantially younger wife, treads a series of shifting alliances between her stroke-crippled father-in-law and her amoral twin stepsons. Jack Clancy, Davy’s father, is always finessing, and not merely in the beds of several complaisant women. His wife, Sylvia, has lived in Ireland for decades but continues to think of the Irish as “they”: “They perceived in a dim way the inner life she continued to live, which was mild, reasonable, tolerant, and self-mocking—which was, in a word, English.”

Vengeance is filled with such enticing sentences, sentences that quietly beckon, promising one thing before flirtatiously turning back and ending unexpectedly. Indeed, language is at the heart of the entire series. Mal in middle-age “still had that smooth seal’s head of oiled black hair”; an elderly man inhabits a “cisternlike space with the indolent furtiveness of an elongated, big-eyed, emaciated carp”; Quirke’s apartment holds an “atmosphere of tight-lipped stealth, as if something vaguely nefarious had been going on that had ceased instantly at the sound of his key in the door.”

The danger with such memorable sentences is that they are memorable. Mr. Banville once tellingly commented that on a good day he writes 400 words, while his shadow, Mr. Black, writes 4,000. The substantial repetitions that appear across the series may owe much to Mr. Black’s speed of composition. In Christine Falls, Mal’s head may be seal-like, but so is another character’s, some 200 pages later. In Vengeance, Inspector Hackett sucks at his cigarette “as if he were performing an unpleasant task that had been imposed on him and that he was condemned to keep carrying out, over and over.” Unfortunately, so did a character in A Death in Summer (2011), smoking “with grim distaste, as if it were a task he had been unfairly assigned but which he must not shirk.” Several more characters have the unusual habit of shaping their cigarette ash into sharpened points, while Quirke’s cigarettes are regularly offered “arrayed like the pipes of an organ.” (The series should perhaps come with an advisory label: “If you dislike accounts of smoking and drinking, look away now.”)

More troubling than this is the recycled plot elements. Incest features repeatedly; Vengeance and A Death in Summer both open with the suicide of a rich businessman; after the first few novels, readers will know that if a character walks down a dark street at night, a trip to the hospital is the least they can expect; and grieving widows should be warned that a detective will shortly be along to bed them.

Ultimately, plot seems to be something that Mr. Black feels is necessary but not interesting, and there is little in the way of traditional crime-plus-detection. Even so, the books manage to be powerful in their evocation of a living, breathing, palpable Ireland of the 1950s. Its inhabitants are given almost music-hall, knock-about dialogue in some scenes—”Will we go for a pint?” “For God’s sake, Barney, it’s eleven o’clock in the morning.” “Is it? Jesus, we better hurry up, then”—which shifts, in an eye-blink, to a drier, more cerebral humor: “He had never had anything against the English, himself, though the Black and Tans had murdered an uncle of his—he was only an uncle by marriage.” Meanwhile, pubs on a summer evening fill with “the sound of slow talk and the rich reek of whiskey,” of “sunshine the color of brass” and “lazy swirls of cigarette smoke in the dusky air.” Elsewhere, a light filtering through windows gives “a muted radiance Quirke always found mysteriously dispiriting.”

It would be wrong if Quirke didn’t find a radiance dispiriting, because he too is a familiar model: the Chandler-esque self-destructive loner episodically drinking himself to death, a void on which each reader’s imagination can inscribe its own outline. “I have no origins,” he says in A Death in Summer. “I have a suspicion of what they were, but if what I suspect is the case, I don’t want it confirmed.” And so, apart from his working relationship with Inspector Hackett, he has no friends. “Aren’t you lonely?” he is asked in Elegy for April (2010), and his reply is that of Romantic heroes from Goethe onward: “Yes, of course. Isn’t everyone?”

He views himself bleakly, far more bleakly than those around him, who seem to find him worth persisting with. After he returns to his girlfriend, whom he had abandoned for another woman, his gambit is a feeble, “I should have telephoned. I should have kept in contact. That was unforgivable.” She retorts, “But of course you’re asking to be forgiven, aren’t you.” (He is. She does.)

The amount of sex that appears to have been readily available in the oppressively church-dominated atmosphere of 1950s Dublin is astonishing, as is Quirke’s apparently magnetic attraction for a vast range of women. This shambling bear of a man with tiny hands and feet—a charmingly Black-ian touch—sleeps, by my count, with eight different women over five novels, from those grieving widows to friends of his daughter, all presumably between the moments when he considers himself to be “at an age . . . when female beauty provoked admiration in him more often than desire.”

But of course genre fiction has only intermittent connection to the mundane details of reality. Instead, what the best noir—and Benjamin Black—does so well is to show how life falls between the cracks, how there are no tidy resolutions. The classic detective story, one character in “Vengeance” reflects, makes “everything so squared off and neat. . . . There was a body, there were clues, there were suspects, then the detective came along and put it all together into a story, a true story, the story of the truth.”

Instead, Quirke lives in a world of nuance, of half-spoken evasions and untruths. In that world—our world—Mr. Black forces his readers to make the same leaps that his characters must make, to build their own conclusions rather than having them delivered ready-made by the all-knowing detective. When Quirke works out the solution in the first novel, all we see is: “Mal had turned his head and was watching him again, and when Quirke met his eye he saw what Quirke had suddenly seen, and he nodded once, faintly.”

In The Silver Swan (2008), Quirke is told by his sister-in-law Sarah that Phoebe, who he had thought was his niece, is in reality his daughter. “And now Phoebe knew, and Sarah was gone, and Mal was alone, and Quirke was as Quirke had always been.” For Quirke, as for his fellow-countryman Beckett, language is all we have, finally, in a desolate world where “we give birth astride of a grave, the light gleams an instant, then it’s night once more.”

About inspectorbucket
Bad Writing at its Best   Robert Hughes: The art critic with a dash of the streetfighter