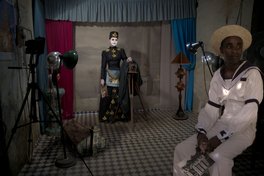 Good art shows us what we see; great art makes the invisible visible, illuminating what we otherwise fail to notice. The Tin Tabernacle in north-west London, temporarily housing the latest commission by the art charity Artangel, is an architectural example of the visibly invisible. Built in 1863, it is a Victorian version of an Ikea flatpack, a corrugated iron hut that was erected while the local Methodist congregation raised funds for a permanent home. Somehow that never happened, and in 1947 the Willesden and St Marylebone Sea Cadets moved in, refitting the interior as a Royal Navy ship c.1950, complete with an anti-aircraft gun, and a wardroom where signs sternly demand, “Are you correctly dressed?”. In the chapel itself, the installation artist Lindsay Seers has turned nave into navy, building an upturned hull in which, twenty-five at a time, visitors watch a dream-imaged film projected on to two balls, one concave, one convex: two all-seeing eyes which, magus-like, stubbornly refuse to give up their secrets.

In the 2009 Tate Triennial Altermodern (reviewed in the TLS, February 6, 2009), Seers’s “Extramission 6 (Black Maria)” was a triumphant blend of documentary and confessional, a precisely calibrated blurring of boundaries between the artist and artwork, revolving around an almost pathological compulsion to record. That same compulsion, now on a larger canvas (and with slightly less impact as a result), permeates Nowhere Less Now.

Seers’s starting point is her great-uncle, a sailor with the Royal Navy named George Edwards, who was stationed off the coast of Zanzibar in an attempt to blockade slave trading at the end of the nineteenth century. A few faded photographs of him have survived, and one of his wife Georgina, who wears a dress covered with Masonic symbols. From these fragments of information, the artist imagines a future where all records have been destroyed, where photographs are outlawed, and everything is recorded as it occurs. She also conjures a future “George Edwards” to guide her. Her search becomes a filmic collage of historical photographs, modern travelogue, mysterious abstract shapes, old-style film-lettering and countdown numbers, and Seers herself in various guises, from researcher to historical recreationist to, well, seer.

Lacking the mesmeric quality of “Extramission”, the film is nonetheless hypnotically beautiful, even if, at forty minutes and without a narrative arc, the viewer’s attention can flag. And the verbal side, as so often with conceptual art, can be slack. Seers’s future George Edwards is on the run, vaguely “involved in crime”; while “in order to think about” her ancestors the artist dresses up as them and travels to Africa. Visitors leave with a 200-page paperback (produced with Ole Hagen), theoretically an elaboration of Seers’s themes, although I’m uncertain what sentences like “Normal trace-apps draw out image-links of all the people with a specific name and give you a short morph-file, which in turn gives you a moving image calculation on the most common morphlogs that person is using” mean.

Seers’s search encompasses everything from family history websites to heterochromia – the condition of having two different- coloured eyes, which her narrator claims is caused by one in-utero twin engulfing its pair (my subsequent reading suggests more mundane causes). In Zanzibar she finds the words “George” and “Dragon” (the name of her uncle’s ship) carved into a tree, and believes these have survived a century, ignoring the pragmatic inner voice that suggests neither George nor its link to a dragon is exactly rare. She conducts a blood sacrifice of a chicken (thankfully unseen) in mock-Masonic rig. She goes to Dar-es-Salaam for no better reason than that it is a place with many corrugated tin buildings, although the link to tin is not George’s but hers, and Artangel’s. But logic, and links, are not the point. The endless quest for an unnamed something is Seers’s mode, and the purpose of her images is precisely to remain forever unrevealed.