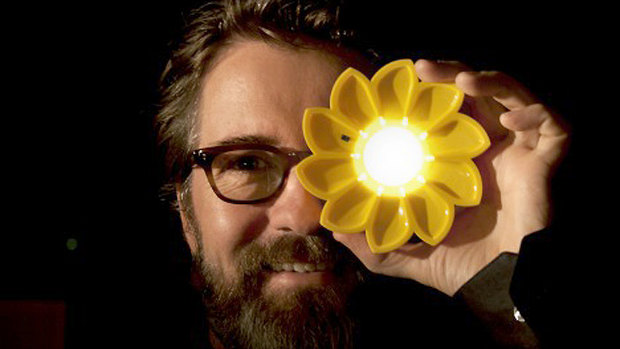 Olafur Eliasson’s The Weather Project (2003) was one of the most successful of the Tate’s Turbine Hall grands projets. Two million people came to stare at Eliasson’s big sun, many sprawling beneath the installation as though it really were a sun and the Tate had suddenly transformed itself into a public park. This is Eliasson’s gift: his art is incomplete until it elicits a physical response from viewers. With Little Sun, viewers carry individual “little suns” – 11cm daffodil-yellow flowershaped plastic lamps strung from lanyards – and walk around a specially opened gallery after dark, their “sun” picking out each artwork.

The lamps become our eyes. No longer passive, we are forced physically to engage with the works in front of us. No longer can we automatically find the best viewing spot in front of a work. We must make conscious decisions – caption or painting? – about things we rarely think about in daylight.

The space the Tate has chosen is its Surrealism galleries, where pieces like Joseph Beuys’s Campaign Bed, or Jannis Kounellis’s Untitled (1979) – all 5 metres of charcoal drawings and stuffed birds – can no longer be encompassed in one glance: viewers must establish, section by section, the artists’ intentions. (And if the artists intended that their work be encompassed in one glance, well, that too must be pieced together.) That is Eliasson’s intention, at any rate. The Tate has, however, underestimated how much light the lamps cast, and overestimated how many people each room can hold and still remain dark. When I entered on the first blackout night, although the warder told me to turn on my lamp, there was no need: the number of lamps already lit meant that I could not only see the art, but even read the captions, with ease. Thus can artistic aims be subverted by practicalities.

Mundane necessities such as ticket sales or health and safety often win over art in contemporary galleries. The Weather Project was a simple concept, perfectly realized. By contrast, the execution of Little Sun is closer to Ai Weiwei’s notorious Sunflower Seeds (2010), where millions of porcelain seeds were spread across the Turbine Hall. There, too, visitors were supposed to interact with the piece as they walked across the crunching seeds. Then, when it was discovered that this was releasing toxic dust, the seeds were corralled behind barriers, like those public parks with “Do not walk on the grass” signs.

Eliasson’s  has a second intention, and a more important one. The 1.6 billion people worldwide who live without access to electricity pay on average 300 times more for their light than we do. These solar-powered lamps provide ten times more light than the kerosene lamps most people are forced to rely on, at one-tenth of the cost. Kerosene, as well as being a fire hazard, produces emissions which are the equivalent to smoking two packs of cigarettes a day. And so Eliasson established a business, the Little Sun company with the engineer Frederick Ottesen to create safer, less costly renewable artificial lighting.

Few are more fervent than I in the belief that art fills an essential need. Yet however fervent that belief, some things are more important than going to a gallery on a Saturday night. If Olafur Eliasson can enlighten those of us who have time and resources to devote to art, well and good; but if he can literally enlighten places of darkness, that must be more valuable.