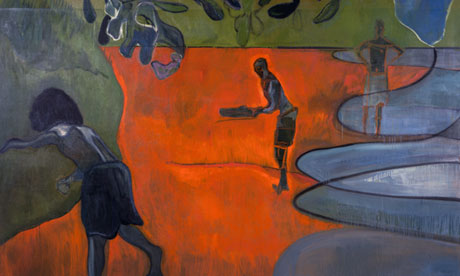 In 2007/8 the Tate had a splendid Peter Doig show. In honour of his Edinburgh retrospective, I am resurrecting my TLS review.

One of the quietest but most resonant presences on the art scene since the early 1990s has been Peter Doig. He is resolutely unfashionable: not just a painter, nor even a figurative painter, but a landscape painter. What could be more out of sync with his contemporary YBAs than that? Yet at the same time, Doig – Scottish born, Canadian raised, resident in Trinidad – is more perhaps more easily described by what he is not.

He is not, for instance, despite this showing in Tate Britain, particularly British. Also, for all that this show is called a ‘mid-career retrospective’, the retrospect is fairly limited, blanking some the interesting deviations his career has encompassed. There are no works pre-1989, and a resolute rejection of all his North American ‘city’ images – no comic cowboys floating in the sky over Woolworths, no luridly coloured, brilliantly lettered city-scapes.

Instead, what might someday become known as ‘Doig-land’ begins in Canada’s snowy backyards and suburbs. In subject the images are ‘homely’ – both in the sense of plain, and frequently, too, of ‘homes’: a standard Canadian country house in The House that Jacques Built (1882), or the truck trundling across country in Hitch Hiker (1989-90), Wyeth-ey not only in theme but also palette. Yet there is a constant tension in his images: Hitch Hiker is Wyeth in theme, but Richter in treatment; The House that Jacques Built is divided horizontally into three, with the house in the centre, all coloured bricks, fairly lights, even a somewhat anthropomorphized ‘face’ in the windows; then the upper and lower strips magnify tiny elements, taking us unnervingly in close-up, finding the strangeness in the mundane.

This strangeness is located in a variety of ways – images of houses that have been destroyed in Pine Houses (Rooms for Rent); or in buildings that are falling apart in the Concrete Cabin series of a decaying Le Corbusier development gently mouldering in the woods. It was with this trip that the painterliness for which Doig has become noted begins to take over. The first Concrete Cabin image is fairly figurative – the building appears sharply behind a painterly scrim of trees. In Concrete Cabin II painterly elegant begin to float in, the light diffused on trees becoming concrete, as white rectangles that punch sharp holes in the picture surface, pushing back the ‘concrete’ of the buildings.

This tension between painterly style and figurative shadow becomes a major preoccupation. The small Snowballed Boy (1995) is covered by a white tracery that is visibly the trajectory of snowballs. By Figure in a Mountain Landscape (1997-8) these white skeins have become a maplike tracery covering the large figure looming over the landscape, echoing the filigree of the landscape itself. Ski Jacket appears twice, as a tiny study (51 x 46 cm) and as a vast (nearly 4 x 3.5 metre) oil. The original study is a ski slope filled with tiny figures, in colouration more beach- than ski-scene, while dark bands of trees, Munch-like images of doom, creep in at the edges. The larger work was amended in progress by turning it into a diptych, which moved the trees from the sides to the centre, surrounded now by candy-coloured skiers. The trees thus become festive ornament; a perspectival shift that changes everything.

Perpsective is the key: Red House (1995/6) is virtually the first image in this show where a house is part of a neighbourhood, not isolated and damply brooding. But it too is estranged, distanced by a series of shadowy figures in the lane, some talking together, some alone, but all looking like grand opera assassins, held in place by a dead, leafless silver birch that rips the canvas into two. More frequently, it is water that divides the canvas, or a wall, or both. In the excellent Laperyrouse series, of a waterfront wall (four versions, ranging from a 2.5m canvas to a 30cm study), we move in and out, like a camera, focusing and then withdrawing: the head of the passing figure, the umbrella over it, the diffuse light, then, in a tight shot, the wall and its peeling texture.

Doig’s handling of paint shifts with his focus, from thick gobs floating on the surface to a pigment that is so thinned down that the canvases can appear almost flayed: the combination of saturated, lush, dense colours, and bone sharp, thin washes is extraordinary. In Figures in Red Boat (2005-7) the background has been pared down to the most vestigial gesture: the shore is a single line of white around a grey-green line of pigment only slightly darker than the blue-grey sky: the red boat is the single concrete object, bleeding its fine, thin colour into the water as the ghosts of passengers stare out blindly.

This late painting is from his more recent work in Trinidad. This section could perhaps have been more rigorously edited – many of these images seem transitional. But where Doig is going, as much has how, is consistently engrossing.

About inspectorbucket
Wilkie Collins: A Life of Sensation, by Andrew Lycett   My turn, Straight Pride UK