Selfridges, history and TV: a rant 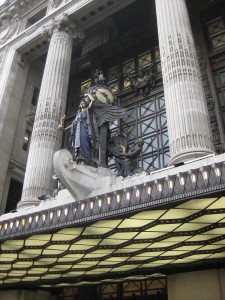 In 2008, I reviewed Lindy Woodhead's book, Shopping, Seduction and Mr Selfridge. It was, by a long way, one of the worst books I had ever read: sloppy, repetitive, self-contradictory and filled with factual errors. It has, of course, now been made into a television 'period drama'. I reprint my review, with no further comment.

Harry Gordon Selfridge is a terrific subject for a biography. A hustler and a go-getter, he built one of the great department stores of the twentieth century, was a brilliant publicist and, over two decades, an astute reader of consumer trends. When he lost his touch, his fall was as spectacular as his rise. Born in Wisconsin in 1856 to a mother who had lost her husband in the Civil War (Mr Selfridge senior wasn’t dead, he just took the opportunity to vanish), he started work at Chicago’s foremost department store, Marshall Field’s, in 1879, as a stock-boy; within eight years he was the general manager, and a junior partner three years after that. Refused a full partnership, he moved to London, planning to take on London’s retailers, who were coasting by on the innovations of the previous half-century.

Selfridges department store opened on Oxford Street in a blaze of publicity in 1909 – a blaze entirely engineered by Selfridge, who spent Pounds 36,000 on advertising in his first week. He sent lavish gifts to newspaper editors, set up a club room in the shop for journalists, complete with typewriters, telephones and a bar. When Bleriot flew the Channel, Selfridge hurried down to Kent to get permission to display the plane in-store, with advertisements boasting “Calais – Dover – Selfridges”. In 1925, John Logie Baird demonstrated his “televisor” at Selfridges (Baird was grateful for the £25 a week).

But Selfridge’s extravagances were growing alarmingly, both at work and at play. He took fifty of his staff on a whistle-stop tour of the United States to inspect American merchandising methods, insisting on including the store’s wine buyer, although Prohibition was in full swing. His private life became public when he took up with the Dolly Sisters, dancers by profession, who actually lived off rich men and gambling, the former subsidizing the latter. By the time the Prudential, a major shareholder in Selfridges, engineered his retirement, he owed the Inland Revenue a quarter of a million pounds and his “account” with the store was £100,000 in the red. Lindy Woodhead describes his pathetic last days, living in a small flat in Putney, taking the bus into town every morning to stand outside what had once been his store. The pathos is affecting, but Woodhead fails to remind us that Selfridge was the Conrad Black, or the Robert Maxwell, of his day; he used the money from a public company as if it were his own.

This lack of context and analysis is unfortunately typical of Shopping, Seduction and Mr Selfridge. There is no exploration of character – the most the author says, in attempting to explain a man who lived with his mother his entire life is that they were “such great friends”. Instead, Woodhead relies heavily on Selfridge’s own words, taking them at face value, without exploring the motivations behind the arch-self-publicist’s statements. She retells the story of his daughter, disguising herself with a wig, in order to get Selfridge to donate money a bogus charity. It passes belief that he didn’t recognize his daughter, but the anecdote is recounted unquestioningly and without comment here. More worrying is the book’s lack of sources. The “notes” are simply a list of book titles, and there is a sentence expressing the “hope” that “by early 2008” detailed sources will be available online. It is not as though the text does not raise questions for the reader now. Sentences begin, “It has been said”, and Woodhead is filled with a biographer’s certainty: Selfridge “must have”, “no doubt”, “would have” known.

It is, however, the historical foundation that is shakiest. It is one thing for Selfridge to claim he had built “London’s first custom-built department store”, but that doesn’t make it so, and his biographer should surely point that out: the Bon Marche, purpose-built, opened in Brixton in 1877, thirty-two years before Selfridges. Woodhead writes that Selfridges was the first, “possibly”, of any “retail store in the world” to light its windows at night. (In fact, Johanna Schopenhauer, a visitor to London in 1803, particularly admired the city’s night-lit shop windows.) Woodhead says Selfridge “pioneered the policy of browsing”. (Sophie La Roche, in her diary of the 1780s, records hours of browsing.) Marshall Field’s is described as “a monument to new technology” in 1902, with its elevators and pneumatic cash-carriers. (Wylie and Lockhead in Glasgow had lifts in 1855; pneus were everywhere from the 1880s.) At the Chicago World’s Fair in 1893, the “world’s first pre packaged tea” appeared. (Tea was sold packaged as early as 1786.) And so on.

The age Selfridge lived in – from the gilded excesses of the 1890s, through the First World War and the frenzied 1920s – is presented to the reader as a series of out- of-focus photographs, the background a blurry haze, while Selfridge himself is a gross caricature. Unconvincing in broad outline and full of misinformation, Shopping, Seduction and Mr Selfridge is a wasted opportunity.

Making sense of a cruel world   Walking with Dickens