The Bicentenary of the Birth of Charles Dickens, Westminster Abbey 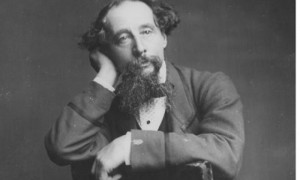 Why? The question really needs to be asked. Why all the hoopla, the adaptations, reprints, books, comics, tweets, no doubt Facebook pages too. Did we do this for Thackeray last year? Will we do it for Wilkie Collins? Or even George Eliot? A deafening silence brings the answer. Dickens is, as he so facetiously named himself, The Inimitable. And today, at Westminster Abbey, it was clear how much he mattered to how many.

Of course there were the professionals there: the descendants, the museum curators, and those who write about him (myself included in that group). But there were lots to whom Dickens just matters, and this was the focus of the ceremony.

Claire Tomalin, whose biography of Dickens appeared a few months ago, read a letter that demonstrated his gaiety of spirits (and possibly more, but she spoke very quickly and, with the difficult acoustics, she was hard to hear). But then most of the rest of the occasion was taken up with Dickens and his attitudes to the society around him, the Dickens who was outraged by the rich’s denigration of the poor, their refusal to accept what was in front of their noses: that the poor were not poor because they were idle, or feckless, or lazy, or weak; they were poor because the rich were rich.

And that is what Rowan Williams, the Archbishop of Canterbury, too, focused on: that the 21st century is becoming as unequal as the 19th, and as long as we fail to turn inwards, to accept that we too have a responsibility to a better society, then we are failing to read Dickens correctly. It is the Dickens of outrage, the man who rejected well-fed, well-to-do complacency, that was being remembered.

Ralph Fiennes, stagy though he was, cut to the heart of the matter with his reading from Bleak House, where Jo, the indigent crossing-sweeper, constantly harried and “moved on” by the authorities, finally dies, asking to be buried next to the only person who was ever kind to him. And let’s give Dickens the last word: Jo is dead: “Dead, your Majesty. Dead, my lords and gentlemen. Dead, right reverends and wrong reverends of every order. Dead, men and women, born with heavenly compassion in your hearts. And dying thus around us every day.”

About inspectorbucket
Dickens at Westminster, a ceremony in tweets   Charles Dickens and the Great Theatre of the World, by Simon Callow, and Becoming Dickens: The Invention of a Novelist, by Robert Douglas-Fairhurst