The Devil and Mr Punch, Improbable, The Pit 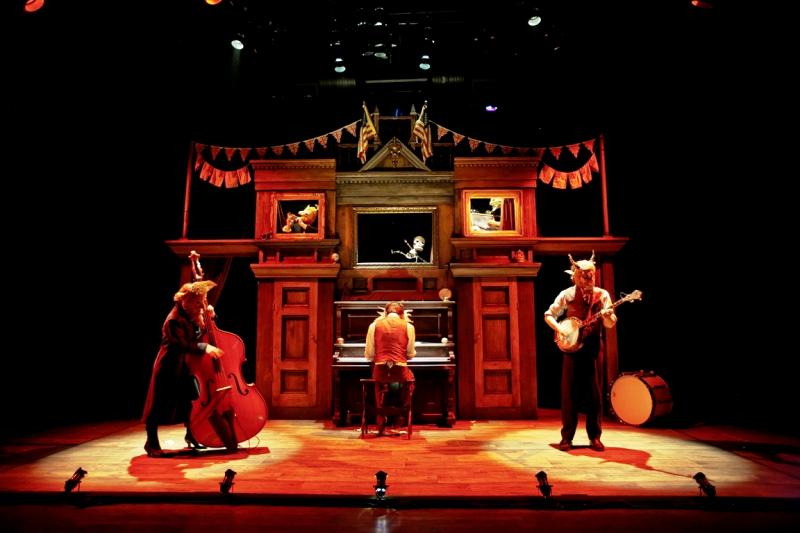 Dickens has been getting all the press in his 200th year, but there is another performer, even older, who celebrates: in 2012, Mr Punch, of Punch and Judy fame, is 350 years old, and Improbable, in revitalising the old showman’s tradition, has given him the best birthday present that can be imagined.

Improbable’s Punch and Judy is the story of Mr Punch and his poor battered wife and child – not to forget Toby the dog – as presented by two old turn-of-the-century troupers, Mr Harvey and Mr Hovey, played by Nick Haverson  and Rob Thirtle, dressed à la Chaplin, complete with tail-coats, bowlers, spats and whiteface. Thus Improbable have bridged the gap between puppetry and performance, between reality and, well, surreality, as we scamper along behind the puppet Punch as he brutalises everyone in his path.

For those who missed Punch in childhood, or who missed childhood, the plot is a picaresque: Punch is nursing his baby; tired of its crying, he tosses it out the window. When Judy protests, he beats her to death, followed by a doctor and then a crocodile, before he is caught and sentenced to hang. Then he merrily tricks the hangman into hanging himself, before he – and the show – go to hell. Even there, however, the rogue continues his merry way, persuading Mephistopheles  to take a break. (“You’ve been under a lot of stress.”)

The wood-panelled walls, windows and doors endlessly open and slam shut as puppets, or disembodied hands, or faces, appear and disappear, making the double nature of what we see, reality vs artistry, the main theme of the evening. Puppeteers take multiple parts, and they also play themselves; puppets have knowing asides, but also revel in their wooden puppetness. Toby the dog composes a letter, the purport of which we never learn; the dancing pigs build themselves into a replica of a “pig-ramid” before being turned into sausages; a naked butcher and his wife (don’t ask) sing a ballad.

The script is funny and swift, mixing authentic scraps of Victorian Mr Punch with more modern interpolations. (I’m pretty clear “Oh fuck” wasn’t in the original. Or the puppet oral sex joke: “I’m going to have to take down your particulars.”) There is the odd creeping Americanism: the judge announces that the trial scene represents “The People vs Mr Punch” instead of “Regina”. (But the production is co-produced by two US theatre spaces.)

The visual jokes are a joy. The dancing skeleton is jazz heaven, while Punch, galloping his horse against a backdrop of a hand bearing a tree and a building being shuffled off in the other direction, reminds us of how much Monty Python owed to commedia dell’arte.

“Toby the so-called dog has put his creativity in the dock,” announces Mr Harvey. And so too have Improbable, and they have been found, resoundingly, Not Guilty.

About inspectorbucket
Wilkie Collins by Peter Ackroyd   Dickens at Westminster, a ceremony in tweets