The Last Pre-Raphaelite: Edward Burne-Jones and the Victorian Imagination by Fiona MacCarthy 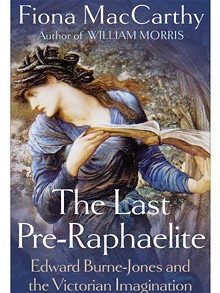 Edward Burne-Jones, Fiona MacCarthy’s “last” Pre-Raphaelite, might just be the most maddeningly elusive artist Britain has ever produced. He was a painter of the imagination, of the might-have-been, of the never-was, all dreamy maidens and sleeping beauties. And yet he was also a painter born into the Industrial Revolution, in 1833 in Birmingham, who thoroughly internalised a Victorian ethos of hard work and sense of moral purpose, whose prodigious output belied his somewhat wispy appearance. His character was equally fluid: he was a charmer who often seemed to be mentally absent, a practical joker of hyper-developed sensibility. How is this man with the booming laugh, the stagy spirituality and the depressive tendencies to be understood?

Sir Edward Coley Burne-Jones began life as humble Ned Jones, born to a struggling picture-framer and a mother who died giving birth. Despite difficult financial circumstances, he was sent to Oxford, which changed his life: there he met William Morris, and there, after reading Ruskin and encountering the works of the Pre-Raphaelites – Millais, Ford Madox Brown, Holman Hunt and Rossetti – he decided on art as his career.

Soon he was moving among these artistic heroes, and his strange, visionary work was influencing the Pre-Raphaelite Brotherhood itself, gently pushing it away from its earlier concentrated realism to more stylised patternings, while, as a founder member of what later became the design studio Morris & Co, he was one of the motivating forces of the Arts and Crafts movement. Design work, particularly stained-glass, was the financial bedrock that enabled this achingly slow painter to spend decades on his canvases.

It also distracted from his roller-coaster private life. Aged 27, he had married Georgie MacDonald, a Methodist minister’s daughter. On the surface, nothing could be more suitable: Georgie was artistic, intelligent and, as Burne-Jones grew more successful, was liked and admired by his new, grander friends. All this went for nothing as Burne-Jones became besotted with Maria Zambaco, a beautiful Anglo-Greek woman studying to become an artist herself (the dark, strong-featured Zambaco can be seen in many of Burne-Jones’s works, as can the sober, wide-eyed Georgie). There was some sort of undefined emotional climax – threats of suicide, hysteria – before Burne-Jones returned to Georgie.

For the rest of his life he felt her steadiness and sense of moral purpose as a reproach, and things were never harmonious thereafter. His relationship with Morris was also damaged – Morris, too, had an errant spouse (Janey Morris had a long affair with Rossetti), and he sided with Georgie, while their political views, moving firmly towards socialism, were increasingly in conflict with Burne-Jones’s fondness for the titled. Thus Burne-Jones’s life became punctuated by a series of amitiés amoureuses with socially prominent women.

Sometimes he wrote half a dozen letters a day to one, at other times he simultaneously declared his passion for two women at once.

All of this is well handled by MacCarthy. Author of the definitive biography of William Morris, she is in the ideal position to turn her attention to Morris’s friend, while as a historian of the Arts and Crafts movement, she gives, perhaps for the first time, equal weight to Burne-Jones’s design work, instead of relegating it to an afterthought to his paintings. Her discussions of stained-glass and wood engraving are enlightening as well as engrossing.

One can’t help but feel, however, that by the end of the book MacCarthy really didn’t like, or even admire, Burne-Jones very much. He was, she writes with a certain impatience, “maddeningly evasive”, and she never really gets to grips with the “peculiar doubleness” of this melancholy dreamer who loved uproarious company.

Especially in regard to his relationship with Morris, she can be sharp. Burne-Jones throughout his life drew spontaneous caricatures of people and events as they passed by, and MacCarthy notes that those of Morris displayed “extraordinary fondness with a little edge of cruelty”. Once, when they were young, Burne-Jones went to the enormous trouble of sitting up one night so that he might secretly alter his sleeping friend’s waistcoat, so that the stout Morris would think he had become hugely fatter overnight. There was a vengeful undertone in Burne-Jones’s love for his friend.

Yet while this is the undertone, MacCarthy glosses over much. Late in life Burne-Jones dismissed the woman who had looked after him as a child, and who had then worked for four decades as his father’s housekeeper. This ruthless act is unaccompanied by any editorial comment, or even adjective, from MacCarthy.

And when the artist conducts two affairs simultaneously, it is owing, she suggests, less to “sexual treachery” than “emotional elasticity”. A handy phrase for an errant husband, but a surprisingly bland one from an outside observer.

Ultimately, and appropriately, however, her focus is on Burne-Jones the artist. The novelist Henry James was not an admirer: Burne-Jones’s work, he protested, was “not painting”, but “literature”. That Burne-Jones did love narrative “more than anything on earth”, was amply reflected in his choice of subjects: Malory and King Arthur, fairy tales, myths and legends. But with deft assuredness, MacCarthy takes on the naysayers, making a good case for “the queer silence of his work, its suspended animation”, its cryptic lushness and beckoning sense of immobile potential.

Burne-Jones was, she writes, the “licensed escapist” of the Victorian age, and in this accomplished biography she allows the Houdini of the canvas to take centre stage once more.

The Last Pre-Raphaelite Edward Burne-Jones and the Victorian Imagination