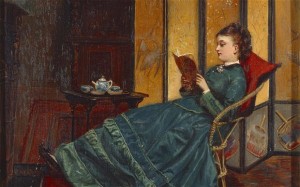 At the beginning of the 20th century, Virginia Woolf made a case for a “Room of One’s Own” for all women, without which they could not become writers.

Near the end of the century, Doris Lessing focused on readers. Libraries, she said, were the most democratic of institutions: there, no one can tell you what to read, or how to read, or what to think about what you have read.

In reality, both notions are utopian: people have always been told what, when and how to read, and libraries enforce this through acquisitions policies, whom they admit and when. For literacy is dangerous to those with power. Anything written down is beyond the control of its creators: reading is interpretation.

How we think about reading is also open to interpretation. Both men and women have historically been painted with books. For men, it indicated professional status, or scholarship, or a religious vocation; for women, the interpretative range is wider. Images of the Virgin Mary reading at the Annunciation began to appear in northern Europe in the 15th century. Three centuries later, a Rococo painting showed a woman reader in a reverie, one hand on her book, the other vanishing under her skirts – reading is no longer about devotion, or even mental stimulation, but suggests a worrying sexual self-sufficiency.

Belinda Jack sets herself the task of charting this vast subject, from early cave paintings (handprints establish that women as well as men were involved in their creation) through the classical world, when the literacy of women cast reflected glory on the wealth of their menfolk, and the Middle Ages, where reading revolved for the most part around religious communities and the courts.

The 16th century brought together improved technology, which reduced the price of books, more widespread education, which increased the number of readers, the Protestant Reformation, which encouraged individual Bible study without the mediation of a priest, and the rise of the middle classes. With the subsequent increase in literacy came, naturally, an increase in attempts to control reading, with the appearance of conduct books, telling women how to be good wives and mothers. By the 17th century, miscellanies, where women copied out their favourite passages, give us, for the first time, hard evidence of what was being read, rather than what ought to have been read. In the 19th and 20th centuries, novels became renowned – and denigrated – as women’s reading, and arguments for and against raged in the press and private correspondence, giving us an insight into readers’ responses.

As a subject, women’s reading is vast, yet it is also intensely private, and it has left little trace for most of history. Even in recent centuries, when readers’ views survive in diaries and letters, the narrow focus on reading is a slippery thing. And so Jack constantly finds herself sliding away from reading, ending up discussing writing, where she looks at the books women authors may have read, or education, concentrating on the books students were told they should read. Sometimes, no reading is involved at all: when the collection of one 17th-century bibliophile was sold, her books were found to have most of their pages uncut – she collected, but did not read.

And while for the most part Jack uses a bland, neutral language, her prejudices, when they peek out, can be startling: writers, she writes, “cash in” on women’s interests – in this case it is fashion she is discussing, but had it been art, or music, would she have chosen the same denigratory verb? Her views on what constitutes good reading are equally forthright. The 12th-century oral tradition, she tells us, was “full of redundant stylistic repetitions – rhymes, clichés and ornate but meaningless flourishes”. Really? Repetitions and flourishes like Homer’s “wine-dark sea”? Surely oral devices are different to written ones, not inferior to them. But no, for she goes on: Dickens, apparently, wrote for “chambermaids” rather than the “educated”.

With this division between high and low, or even middlebrow, it is perhaps not surprising that Jack disregards the power and reach of 18th-century circulating libraries, and barely mentions magazines, with only a single line on Addison and Steele’s widely read Tatler. In her discussion on the 19th century there is nothing on Gothic novels nor their successors, sensation fiction, supposedly a women’s genre, and just one lonely mention of penny dreadfuls and working-class Sunday newspapers.

Perhaps this is because the book is, essentially, about upper-class women. In the 19th century, Jack’s representative readers are Jane Austen, the journalist Harriet Martineau, Lady Louisa Stuart, and the wife of the philosopher Thomas Carlyle. To drive her class bias home, she adds that women were able to find employment “principally” as teachers, actors and writers – overlooking the millions of female servants, agricultural labourers and factory workers.

Yet these women too read, if not as often or as widely as their upper-class sisters. Margaret Cavendish, the Duchess of Newcastle, wrote: “I have made a world of my own: for which nobody, I hope, will blame me, since it is in every one’s power to do the like.” It was indeed within their power, although that power was limited by social expectations. My great-grandmother, an immigrant to Britain from Eastern Europe, arrived with a “ladies’ prayer book”: on the right-hand pages were the Hebrew prayers; on the left were, not translations, but explanations, to suit lesser female minds. Facing the prayer for the dead it said, simply, “Here you cry.”