As the much-loved Arthur Marshall so profoundly noted, Ibsen is “not a fun one”. One could, with as much truth, say the same about Shakespeare’s rarely staged Timon of Athens: its misanthropy, missing motivations and mercurial shifts in temper do not spell a fun night out to most. It is greatly to the credit of director Nicholas Hytner and his team, therefore, that the evening, if it doesn’t exactly fly by, is consistently engaging, thought-provoking and downright intelligent.

Hytner and his designer, Tim Hatley, have created a world that mirrors our own. Timon is officially “of Athens”, but here we begin at a private party celebrating the opening of “The Timon Room”, named for a museum’s generous benefactor. Yet even as the sycophants and money-men hover over the evening’s Maecenas, the room itself is presided over by an El Greco: Christ Turning the Moneylenders Out of the Temple.

Timon’s adoring “friends” praise him to each other as “the God of kindness”, the “noblest mind”, even as they segue into commending his wealth as the representation of that kindness and nobility.

The problem with the play (which Shakespeare, possibly collaborating with Middleton, seems to have abandoned, and which may never have been performed), is that Timon has no interior life – there is, as Gertrude Stein said (about Oakland, as it happens, but never mind), “no there there”. We have no idea where Timon’s money came from; we don’t know anything about his family, his private life, his ideas, thoughts, what drives his profligacy, his almost manic generosity. When, therefore, he loses all and rejects the world, we cannot feel that a great man has been destroyed: he is simply a vacuum.

Timon, unusually (and possibly merely because of its uncertain performing history), is not entitled by Shakespeare “The Tragedy of…”, but only “The Life of…”. For, truly, there can be no tragedy for a man with no interiority. What is it that makes Timon break when he is betrayed by his so-called friends, to go from manic giving to equally manic hatred for the world? Simon Russell Beale as Timon pulls all that is possible, and more, from this part – his gentle, almost tender verse-speaking draws every possibility out of the morass of curses that defines the second act of the play; his very physicality shifts between the giving and the rejecting.

He is well-matched, too, by those fine performers Deborah Findlay as the steward, written by Shakespeare as Flavius, here become Flavia, and Hilton McRae as the cynical philosopher Apemantus 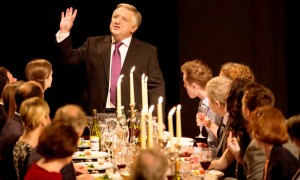 . Apart from their individual performances, they are unusually well paired: Findlay’s devotion is expressed entirely as generous affection, while McRae’s fondness is given a sterner distance and demeanour. The scene where Apemantus and Timon spar amid the dereliction of the homeless encampment is a pairing of equals as despair, comic cynicism and competitive cursing flicker back and forth between the two men.

Given its ragged nature, Hytner has done well to ground the play by reflecting our own world back at us, a world where the only unforgiveable act is to be poor. Alcibiades, the rebel leader (a good performance, too, from Ciarán McMenamin), leads the equivalent of the Occupy Wall Street forces, who catcall “Shame on you” (as they do not in the original). Outside is Belgravia stucco, steel-and-glass City, sandstone Gothicised parliament.

And finally we watch as ultimately Alcibiades too sells out. Hytner, Hatley, and Shakespeare allow us no hope: the money-changers will not be turned out of the temple, they say. It is not that easy.