A Bed of Scorpions 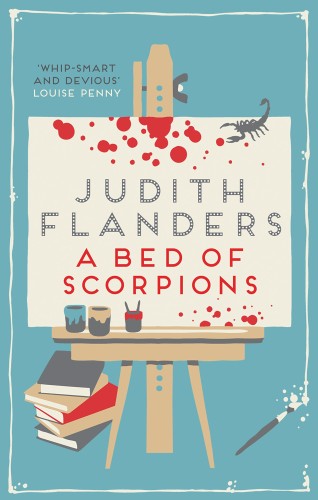 What’s an editor to do with so many demands? Do you deal with the morning’s pile of manuscript submissions first? Or the swine from sales who steals all the chocolate digestives? Or do you concentrate on your ex-lover, whose business partner has just been found dead in their art gallery, slumped over his desk with a gun in his hand?

It’s another day at Timmins & Ross publishing house, but when sharp-tongued editor Samantha Clair’s CID boyfriend is brought in to investigate Frank Compton’s death, her loyalties become stretched. And when one of Aidan Merriam’s artists is found dead in identical circumstances, Sam takes on the art world and the CID, armed with nothing more than her reliable weapons: satire, cynicism and a stock of irrelevant information culled from novels.

Praise for The Sam Clair Mysteries

‘It’s a thriller, a wickedly funny insider’s view of the book trade and the heroine has a backbone – for me, the perfect storm of an entertaining read. Loved it.’
–Kate Saunders, The Times

Sam Clair is like a sleuthing Bridget Jones: a witty, self-effacing, smarter than she lets on, sassy singleton in the big city. […] m Flanders’ witty prose keeps readers guessing, and charmed by her delightfully realistic protagonist.
Cleveland.com

Comparisons to Janet Evanovich’s books about bounty hunter Stephanie Plum are clear. Notably, both feature strong, funny, messy female narrators, and both are set in close-knit neighborhoods populated by (mostly lovable) eccentrics. Both protagonists even have cops for long-suffering boyfriends. Flanders, though, has a distinctive and appealing voice of her own, especially when it comes to wisecracks about a publishing scene beset by executives more interested in “product” than in worthwhile writing
Seattle Times