The Invention of Murder 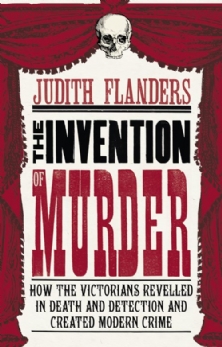 In the nineteenth century, murder – a rarity in reality – was ubiquitous in novels, in broadsides and ballads, in theatre and melodrama and opera – even in puppet shows and performing dog-acts. As Punch wrote, ‘We are a trading community, a commercial people. Murder is doubtless a very shocking offence, nevertheless as what is done is not to be undone, let us make our money out of it.’

In this meticulously researched and compellingly written exploration of a century of murder, Judith Flanders examines some of the most gripping and gruesome cases, the famous and the obscure, the brutal and the pathetic – to build a rich and multi-faceted portrait of Victorian society. The Invention of Murder is both a gripping tale of crime and punishment, and history at its most readable.

“The Invention Of Murder,” chronicles the way that murder stories seeped into all forms of 19th century entertainment, from the absurd like wax museums and “murder tourism” to the theatre, novels and detective stories we love today. Judith Flanders joins guest host Frank Sesno to talk about the evolution of the real — and fictional — crime story.

Praise for “The Invention of Murder”

‘This is much more than a compendium of famous crimes. As such books as The Victorian House and Consuming Passions have demonstrated, Flanders’s knowledge of the period is both wide and extraordinarily deep. She writes incisively and often with dark wit. Best of all, she has a wonderful ability to make connections and to show us familiar sights from unexpected angles. All of these qualities are displayed to the full in The Invention of Murder.’
Independent (full review)

‘Judith Flanders displays a profound understanding of the Victorian age, encyclopaedic knowledge of crime and criminals, and the popular reactions towards both. Further, she presents it with a sly, wry humour that is a perfect complement to the subject. Dare I say it would be a crime not to read this book?’
Donna Leon

‘Flanders has written a book rather like one of the great, rambling Victorian novels that she discusses, though most readers will find her work a lot easier, and a lot more fun […] the sheer sumptuousness of Flanders’s book leaves the reader wanting still more’
Clive Emsley, BBC History Magazine (full review)

‘Flanders’s book is more than a catalogue of crimes … it builds into an alternative history of the Victorian age, its narrow, purposeful focus providing a means of seeing, from an oblique perspective, terrain which might previously have seemed familiar.’
Jonathan Barnes, Times Literary Supplement (full review)

‘Judith Flanders has produced a compelling study of how crime, and crime prevention, emerged as a popular obsession in 19th-century Britain, and came to dominate its literature …The Invention of Murder is mesmerizing.’
Charlotte Gray, Globe and Mail (full review)

‘…part social history, part literary history, and part penny-blood itself. In the fine tradition of its subject it both has its cake and eats it. Yum. Strychnine’
Sam Leith, Spectator (full review)

‘Flanders brings to her writing a vivid storyteller’s and nicely understated gallows humour […] More important though, and far more impressive, is her tenacity in stripping away the gaudy layers of folktale and legend around the period’s most notorious murders and revealing how often these inventions obscured lives of heartbreaking ordinariness.’
Robert Douglas-Fairhurst, Telegraph (full review)

‘…plenty of gruesome detail, but also a dry humour… The Invention of Murder is a valuable and well-researched account of Victorian society in Britain and its growing fascination with the ultimate crime. […] All human death is here.’
The Irish Times (full review)

‘This excellent, well-written and hugely well-informed history of Victorian murder will also provide you with plenty of appalling enjoyment of the Fine Art Of Murder.’
Peter Lewis, Daily Mail (full review)

‘[a] remarkable history […] To suggest that the Victorians invented murder may sound like a stretch too far. But like a detective, forensic expert and barrister rolled into one, Flanders has marshalled her clues, scrutinised her evidence and proved her case beyond reasonable doubt.’
Wendy Moore, Sunday Telegraph (full review)

‘a book jam-packed with fascinating details, not only about the Victorian attitude to murder, but much else besides…’
Craig Brown, Mail on Sunday (full review)

‘a penetrating study of the way in which murder can take hold of the creative imagination.’
DJ Taylor, Independent on Sunday (full review)

A study of the roots of our fascination with violent crime fascinates Andrew Motion
Andrew Motion, Guardian (read review)

‘a book that should be on the shelves of every crime novel reader and crime novel writer’
Stuart Kelly, Scotland on Sunday (read full review)

‘The Invention Of Murder is what great non-fiction should be; as erudite as it is entertaining, as gripping as fiction…’
The Scotsman (read full review)

Goodreads reviews for The Invention of Murder