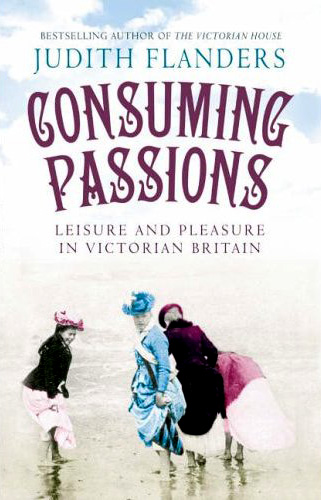 Imagine a world where just one in ten people has a knife or a fork, where five out of six do not possess a cup. This was Britain in the early eighteenth century, yet by the close of the nineteenth, lives were transformed, centring around urban living, industrial employment, shopping and professional entertainment. The Industrial Revolution brought with it factories, railways, mines and machines. It also brought travel, department stores, leisure and pleasure.

“This book is as packed with goodies as a rich Victorian Dundee cake… a work which is pure joy.”
A.N Wilson, The Daily Mail

Consuming Passions tells the fascinating story of how, over two centuries, leisure became an industry. The seaside and tourism, newspapers and novels, concerts, museums and shopping arcades – all were part of the new consumer world. From Aston Villa’s origins in a Sunday-school to Thomas Cook’s temperance tours, from Aquascutum to W. H. Smith, Judith Flanders reveals how, building on revolutions in science, technology and industry, an entirely new world was created, a world of thrilling new shopping sensations, lavish spectacle and wild theatricality – the world, in fact, of today.