The Murder of the Century: The Gilded Age Crime That Scandalized a City and Sparked the Tabloid Wars, by Paul Collins 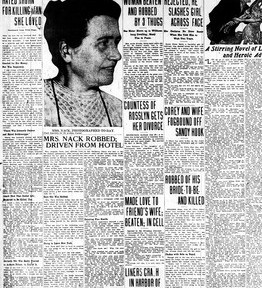 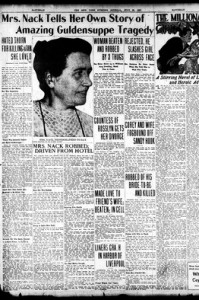 History is filled with stories that enthralled newspaper readers for weeks or months at a time, that were the currency of thought and speech for everyone and then suddenly vanished. Excavating these episodes—excavating the right episode—can bring to life a period, creating a microcosm for exploring attitudes and ideas of times long gone.

In “The Murder of the Century,” Paul Collins focuses our attention on a New York murder that created a sensation in the summer of 1897. One afternoon a group of boys playing by the East 11th Street Pier found a flashy red-and-gold parcel in the water. They excitedly unwrapped it, but instead of finding something to eat or sell, they discovered a man’s torso. The next day another part of the body was found in an isolated rural area of the Bronx, near 170th Street along the Harlem River.

The inept, corrupt Manhattan police of the time wanted to write the discovery off as a medical-student prank. But the newspapers had put themselves on the trail, in particular Joseph Pulitzer’s New York World and William Randolph Hearst’s New York Journal. Pulitzer, whose populist crusading had once put him in the vanguard of journalistic innovation, was fast being overtaken by the rich and rambunctious Hearst, their struggle propelling the era of yellow journalism ever faster toward sensationalism.

When the torso discovery was made, a reporter from the New York Herald overruled the police at the scene and went for the coroner. A rival at the World, for his part, hunted down retailers of the exotically patterned red-and-gold oilcloth, even as officials made sweeping statements based on nothing: “The murderer is a Sicilian or possibly a Spaniard or Cuban. Maybe a Spanish spy has been put out of the way by the Cubans.”

Pulitzer’s paper offered a staggering $500 reward to any reader “who could deduce a solution”; Hearst then offered $1,000. Hearst had been topping Pulitzer for some time, spending more money and willing to field more resources. Now he was beating him with technology, too, as the Journal reproduced a facsimile of the oilcloth—the first time color had been used in a news story.

Meanwhile, a journalist at the World had a hunch, based on his viewing of the torso at the morgue. The combination of strong muscles and soft, well-cared for hands sent him heading for the Murray Street Baths, where, sure enough, a masseur named William Guldensuppe had failed to show up for work. Despite this brilliant leap of intuition, Pulitzer was pipped to the post when one of Hearst’s reporters located the man who had sold the oilcloth. This breakthrough, in turn, took the reporter to the apartment of the buyer, one Augusta Nack, landlady and lover to Guldensuppe, and a local midwife. As Mr. Collins notes, she had a brass plate claiming that she was “licensed,” even though no licenses were necessary, or available, to midwives. She was, it emerged, a back-street abortionist.

Once at police headquarters on Mulberry Street, Mrs. Nack was giving nothing away, despite a quickly unraveling story. It turned out she had been involved in a love triangle with Guldensuppe and his fellow-lodger, Martin Thorn, whom Guldensuppe had recently treated to a beating. Everything now seemed set for a quick, if thrilling, trial, with only one possible result.

Indeed, neither the perpetrators nor the result are in doubt from the early pages of “The Murder of the Century.” It is therefore greatly to Mr. Collins’s credit that he keeps the narrative interesting, moving from investigation, to trial, to sentencing and after. The pace is admirable—he ensures that the reader is up to speed on details of current court procedure, or the politics of fin-de-siècle New York, yet he never becomes bogged down in unnecessary side-issues. His exploration of the newspaper world, at the very moment when tabloid values were being born, is revealing but also enormously entertaining.

One wishes, therefore, that the writing itself rose above the pedestrian. The book too frequently reads as though Mr. Collins was writing hurriedly. Repetitions and verbal tics abound. Baseboards were burned in “a fit of evidence-room housecleaning”; case files were destroyed “in a fit of housekeeping.” The police station “bristles” with wires on its roof, just as a newsroom is said to be “bristling,” this time with telegraphs and typewriters. Too many sentences run on without focus: “Mulberry Street was a bewildering place, the nerve center for over 100,000 arrests a year and uniformed officers issuing curt commands from the telegraph offices in the basement all the way up to the Lost Children Department on the top floors.”

As disruptive are words and phrases that simply do not mean what the author intends them to mean. One character has “blond hair pompaded high.” (Pomaded? In a pompadour?) Another “squandered a series of jobs”—one can squander the money that jobs bring, or the opportunities they offer; one cannot squander jobs. Sometimes the imprecision brings about a surreal humor: The impresario Ziegfeld, Mr. Collins reports, went to see Thorn accompanied by his “personal mistress.” (An impersonal mistress doesn’t really bear thinking about.)

Given the many strengths of “The Murder of the Century,” it might seem unkind to belabor these points. But it is because of the strengths that weaknesses are worth mentioning. Mr. Collins has a clear eye, a good sense of telling detail, and a fine narrative ability. If only he, and possibly his editor, had spent more time on the nuts and bolts of creating a book, “The Murder of the Century” would have been of more than ephemeral value.

About inspectorbucket
Slutwalks? You (haven’t) come a long way, baby!   A curator, my kingdom for a curator