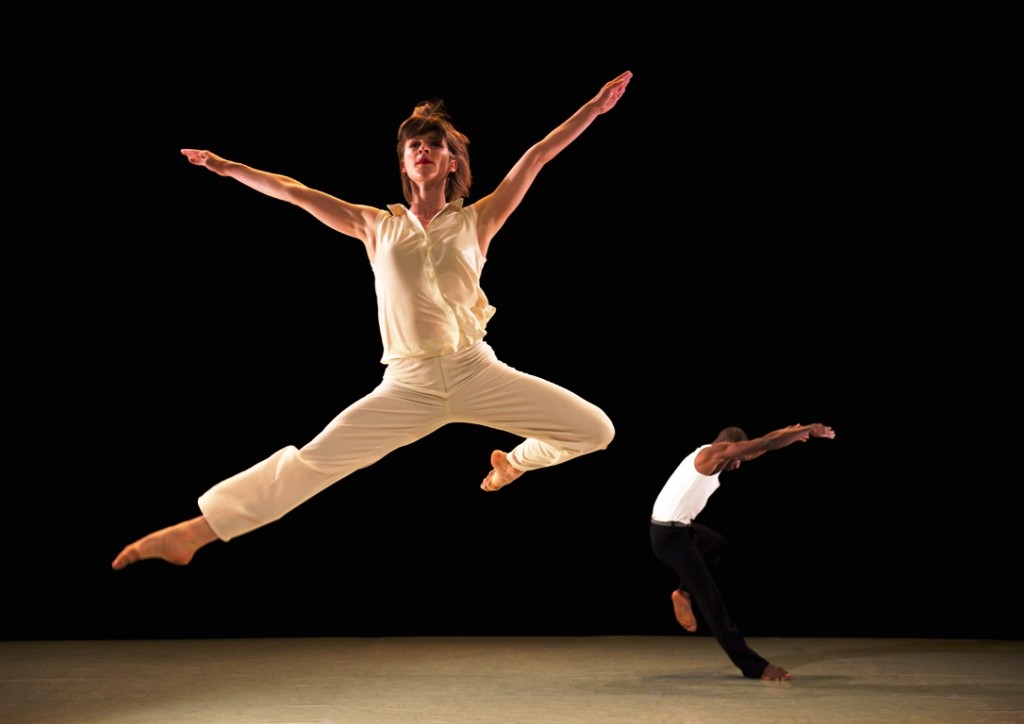 The one thing you can count on at an Alston evening is the quality of the music: everything Alston does, and everything he creates for his dancers, revolves around the music. In his wonderful Roughcut, Steve Reich’s New York Counterpoint for clarinet and tape begins before the house lights dim, his sharp, vibrant phrases giving a sense of urgency to the audience before they have even settled down.

Once the curtain goes up, Alston and his dancers manage the extraordinary feat of making the complex layers of music (the clarinet, played by the splendid Roger Heaton, is soon joined by James Woodrow in Reich’s Electric counterpoint for guitar and tape), of intricately phased phrasing, seem deceptively simple.

Roughcut  may be likened to Balanchine’s Agon, another black-and-white costumed piece, with its similar duets and trios to spiky music. Here Alston’s jazzy trio has the same jaunty air, and there is even a moment in one pas de deux when the man lies on the floor as the women swoops down in arabesque – Agon redux. It is impossible to watch Roughcut without being uplifted, cheered – and hugely impressed as always by the sheer joyous skill of his dancers.

Martin Lawrance’s Lie of the Land  also revels in its music, here Ned Rorem’s pear-drop sharp-sweet String Quartet No. 4. Lawrance creates movements that break into abrupt segments in unexpected places, mirroring the deep rhythm of Rorem, and again allowing us to be carried away by the forward momentum. The music and the movement are so tightly meshed that it is impossible to imagine hearing the quartet again without seeing, in the mind’s eye, Lawrance’s choreography.

Given these two superlative interpretations of music, Alston’s A Ceremony of Carols, receiving its London premiere, is a bit of a let-down. Somehow Britten’s pure, serene setting of medieval carols (and yes, it’s a strange time of year to be performing them) have failed to trigger an equivalence in Alston’s choreography, set on his own dancers, and bulked up by students from London Contemporary Dance School. Together with the choristers of Canterbury Cathedral Choir, and a harpist, the stage picture is surprisingly cluttered, and that, together with the slightly formulaic choreography, makes it hard to get an overall picture.

Gradually the piece begins to cohere, beginning with a magnificent “Balulalow” from a boy-soloist. Then, with the thickening musical complexity of “As Dew in Aprille”, the choreography begins once again to match the music in a tumbling out of ideas for the eight women, as again happens with the following “This Little Babe” for six men.

But it is not vintage Alston. The lighting, too, is harsh and flat; while the purple of the choristers’ robes fight with the box-like and unappealing red and maroon tunics of the dancers. And, finally, I really cannot reconcile myself to a bench that, turned on end, becomes a crucifix, on which a dancer leans back on his elbow, as if about to say “Hello, sailor, come here often?”