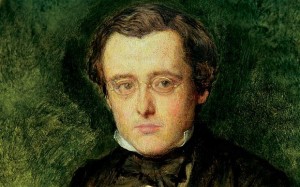 In Dickens’s bicentenary year, it is pleasant to remind ourselves that the 19th century did, in fact, produce authors other than “The Inimitable”, as Dickens (only partly joking) called himself.

Ackroyd was an earlier worshipper at the Dickens shrine, his 1990 biography including dramatised imaginings of Ackroyd meeting his subject. Now, more conventionally, he turns to Collins, Dickens’s friend, the author of The Woman in White and the book TS Eliot referred to as the earliest and best detective story, The Moonstone.

Collins seems at first a less interesting subject, however. He was the son of a well-known artist, who took his children touring in Europe. Yet as an adult, Collins had his share of unconventionality. His father’s death left the family on uncertain financial foundations, and Collins seemed destined for a life as a tea-merchant, before his writing permitted him to move to the bohemia his personality craved. Never marrying, Collins had two long-term relationships, for much of the time simultaneously, living openly with the working-class Caroline Graves while also setting up with a shepherd’s daughter, Martha Rudd, with whom he had three children.

In contrast to the healthy, focused Dickens, Collins, always sickly, was addicted to laudanum, ultimately taking daily doses large enough to kill anyone not so habituated. The drug not only caused physical problems, but induced terrifying hallucinations, including the fixation that another Wilkie Collins was sitting beside him to prevent him writing. Once the struggle between the two Wilkies was so ferocious an inkwell was overturned.

Also unlike Dickens, Collins wrote only two masterpieces, and a lot of potboilers: indeed, of his more than 30 books, Ackroyd only deems half worthy of examination. And while Collins’s narrative skill was thrilling, plot summaries such as Ackroyd gives us can’t bring to life the core of his success. Instead, in Ackroyd’s hands Collins’s life falls into a routine: a house move followed by an illness followed by a plot synopsis. After a while, it becomes a bit deadening.The book appears to have been written swiftly, with repetitions of words and phrases, or flat-out contradictions (omnibuses both “catered for everyone” and were “relatively expensive”). The text is peppered with “must have”, “seems” and “is likely”, recurring far too frequently to create an air of confidence. And then, just when you wonder what the point is, Ackroyd reminds you what an insightful writer he can be, as when he describes an early Collins novel where “the chapters succeed one another in beautiful monotony, like waves crashing on the Tahitian shore”.